These hand knotted designs were inspired by Deirdre’s observations of colours and forms through glass, glass objects and water.  Nine new designs take her carpets in an entirely different direction. 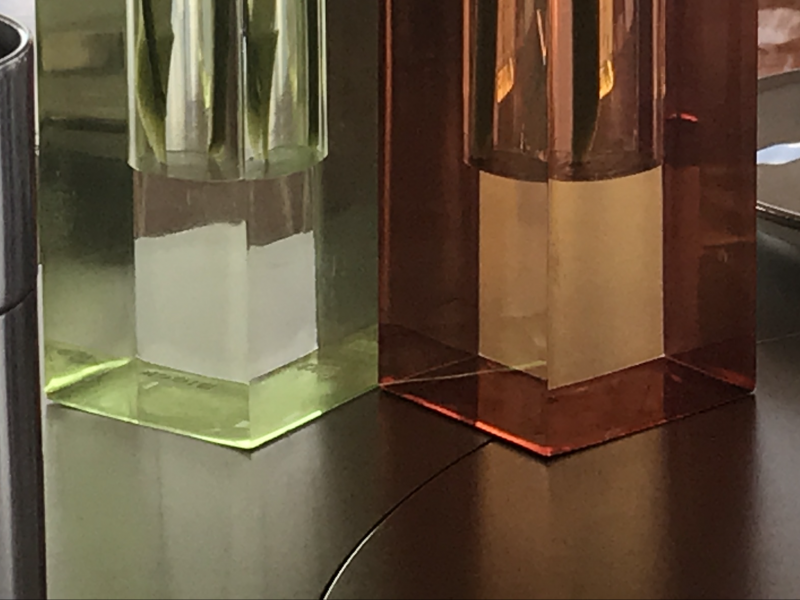 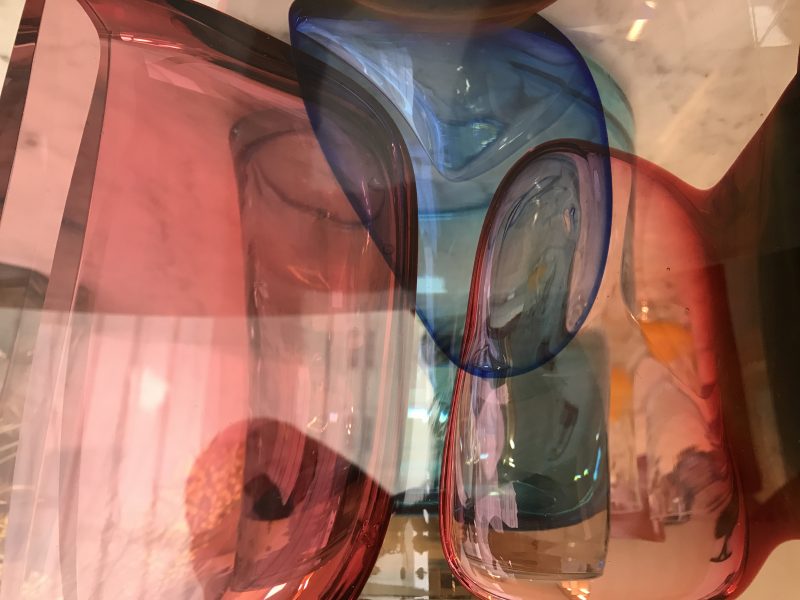 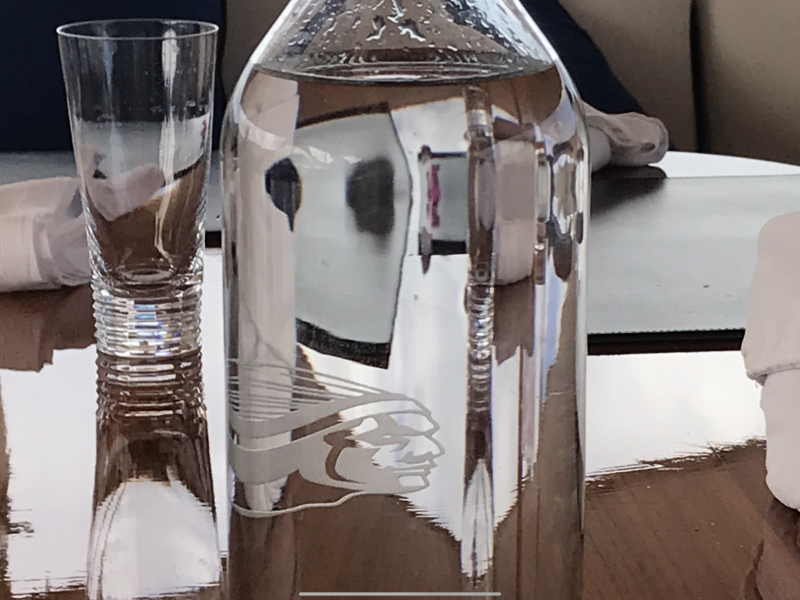 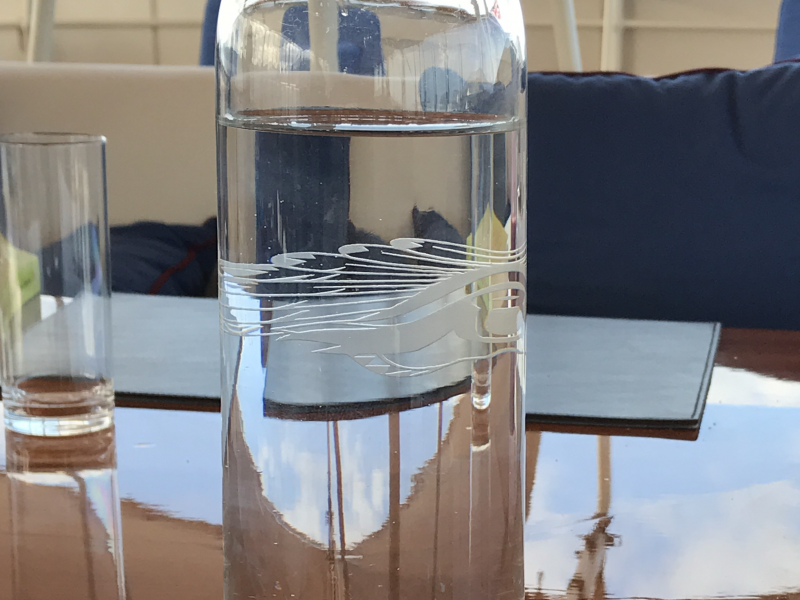 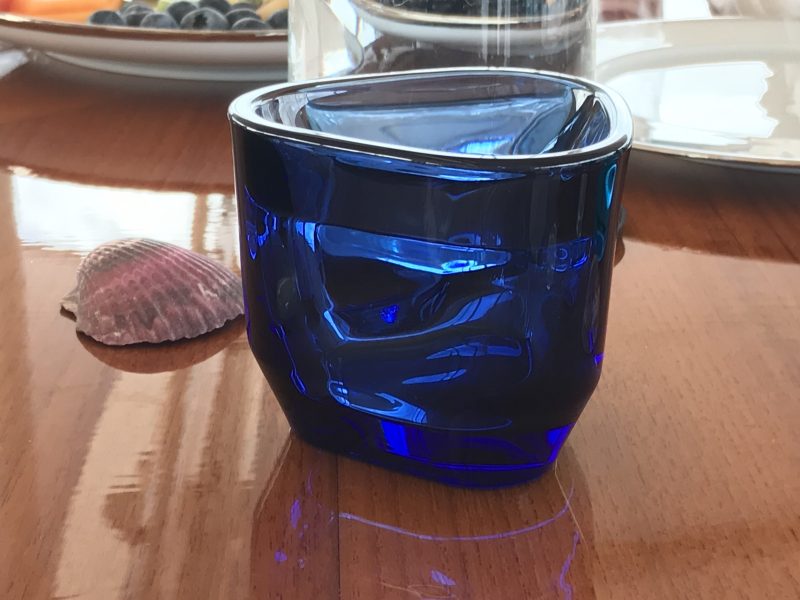 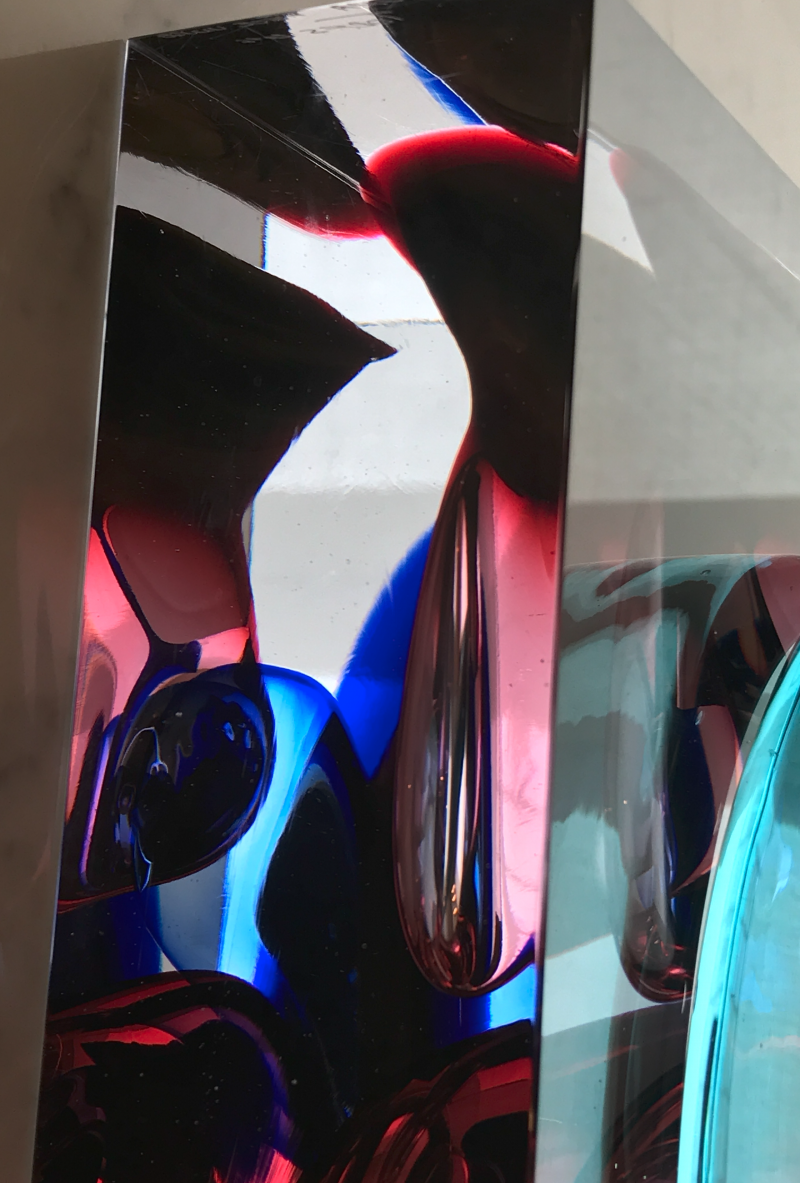 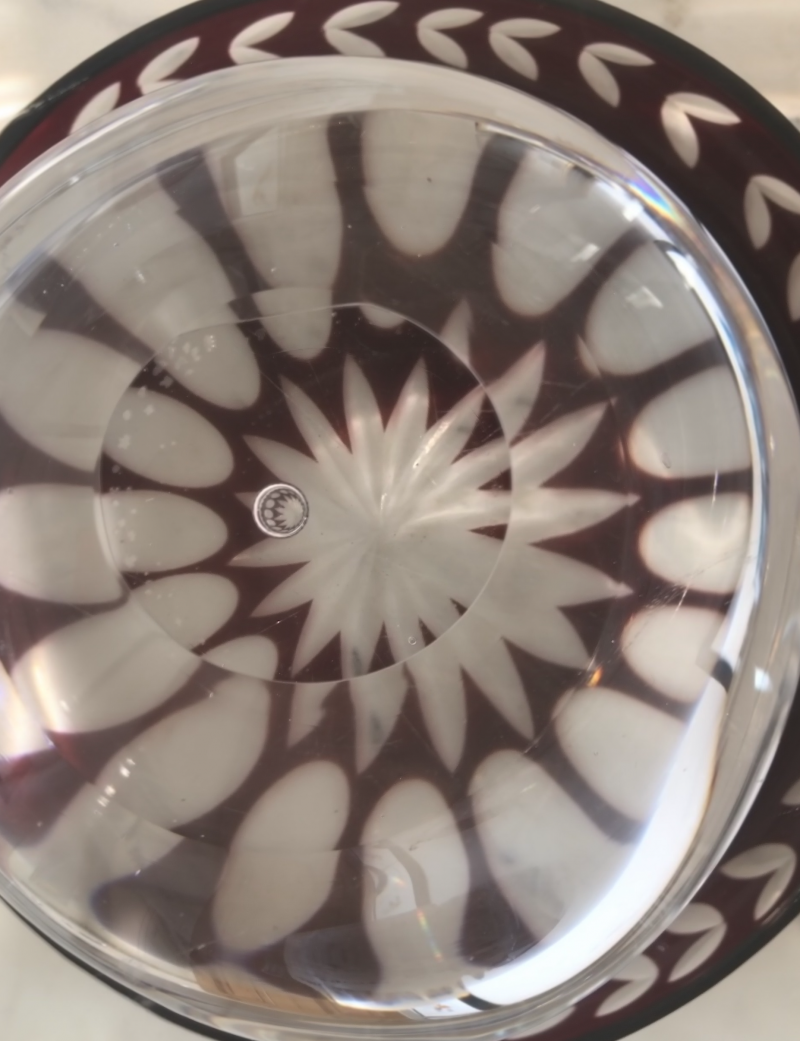 On a visit to the Amalfi Cathedral and in one of the small rooms at the back behind all the magnificence of marble and gold was a small plain window high up with beautiful, simple pale colours.  The light behind it made it impossible to photograph but the colours stayed in my mind and I thought that in silk, it might make a lovely wall hanging for a windowless room.
Click here to view all Deirdre’s new designs online or contact us to arrange a viewing of the new collection at our Kings Road gallery.
27 February 2019
Share this post

Last month Deirdre joined a host of hand-picked luxury interiors, fine art, couture and automotive brands exhibiting at ‘Curation of the Finest’, a collection of rare and one-off contemporary collectables and objects, showcased by Luxury Cave at London’s Design Museum.

Luxury Cave‘s aim is to ‘present a new viewpoint of luxury that focuses on objects that speak of craftsmanship, emotion and investment of time.’

Deirdre Dyson’s carpets fulfil this brief perfectly – the combination of Deirdre’s sketches and colour selection realised as carpets through the age-old craft of hand knotting by artisan craftspeople and the bespoke process, cannot be rushed, assisted by but impervious to technological advances. This is slow design at its finest.

Deirdre was excited to create and unveil her first ever Carpet Artwork exclusively for the event.

Deirdre took inspiration from ‘the rising steps to freedom and breaking away from the ties that bind us’ and the piece is a joyous juxtaposition of colours hand knotted in wool and silk.

Deirdre also exhibited her intricate PLUMES carpet from this year’s PLUMAGE Rug Collection, bespoke versions of which will also be available exclusively through the Luxury Cave website for the next three months. 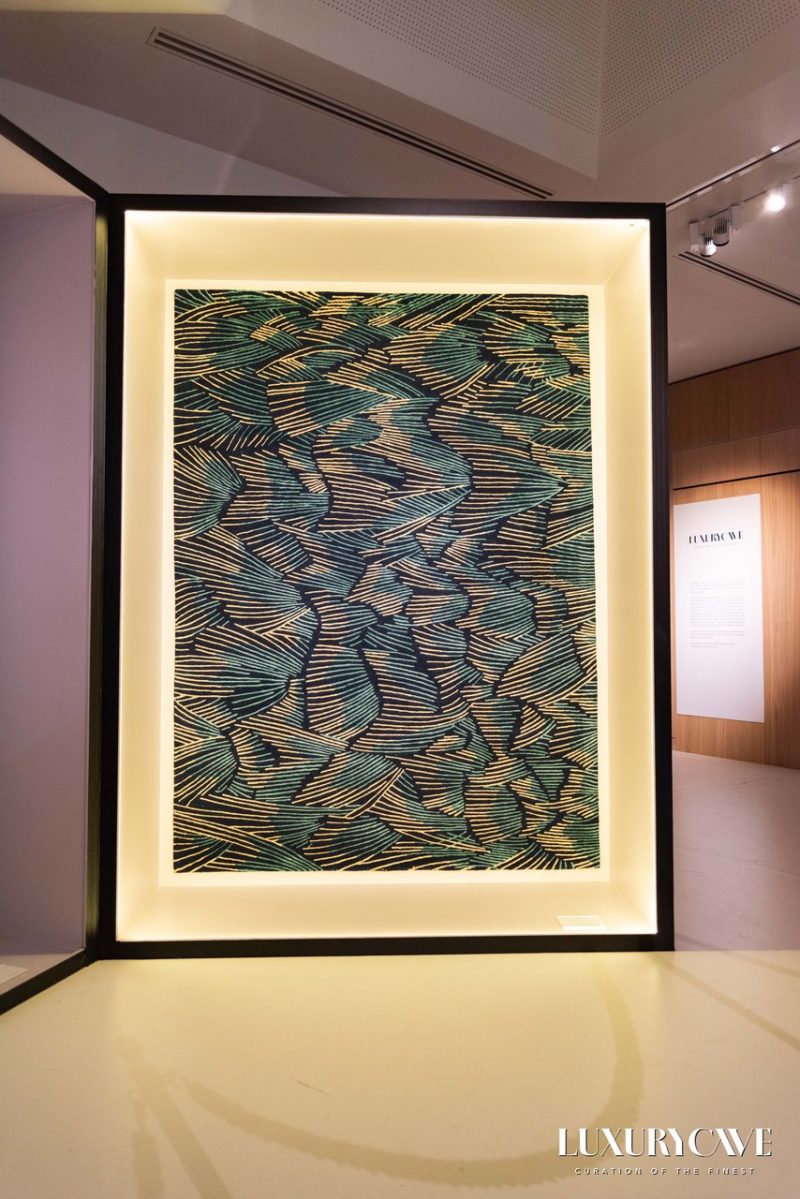 PLUMES is a masterly intricate carpet design of interlocking feather barbs on a deep navy background with striking turquoise tips, the fine detail of which posed a real challenge to our incredibly skilled Nepalese weavers.

Both pieces, as with all Deirdre Dyson carpet designs, are Goodweave certified.

The exhibition was co-curated by Sofia Barattieri and Darren Miller of Luxury Cave and art directed by celebrated Set Designer Simon Costin. 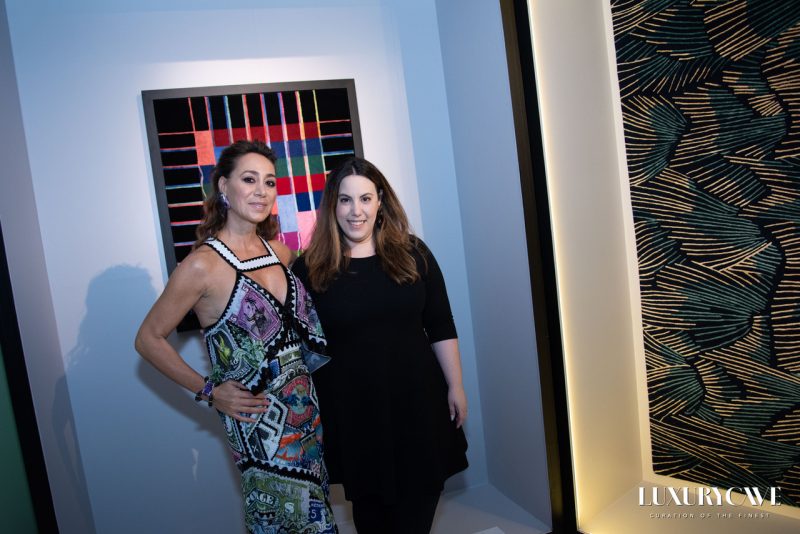 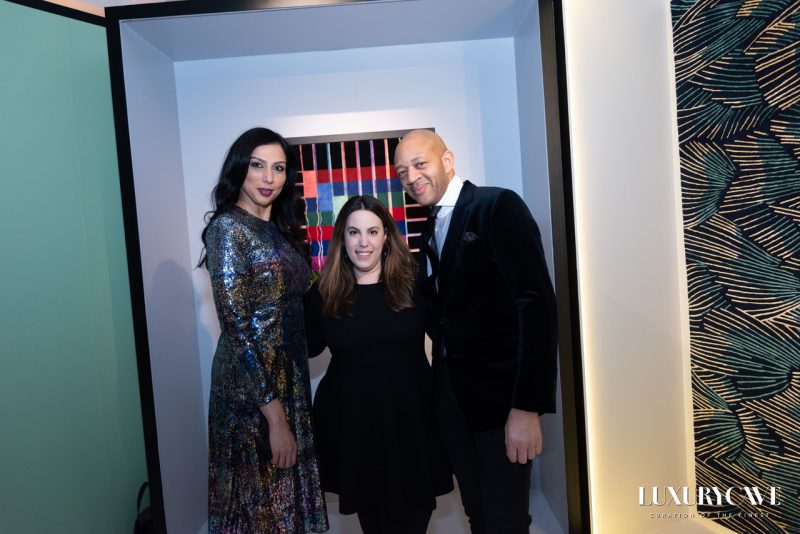 Deirdre’s artwork and carpet at the exhibition 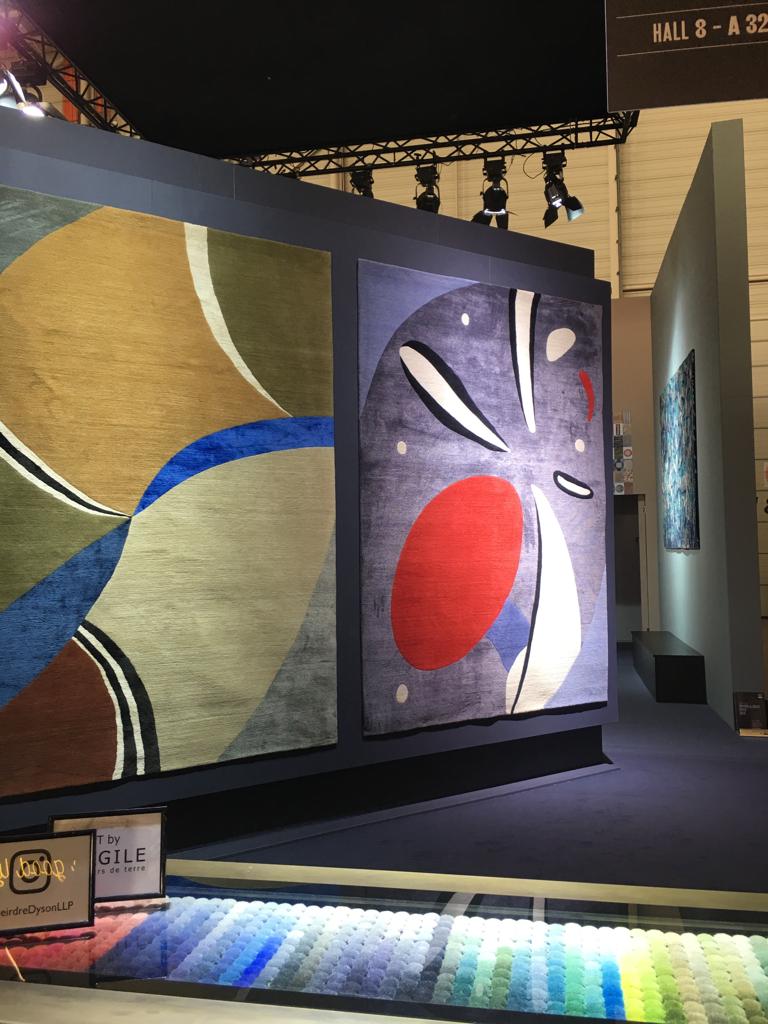 Deirdre’s new rug collection has received a wonderful reception at Maison & Objet Paris, where eight of nine new designs on display in Hall 8, stand A32 were showcased on a custom made, towering stand painted with Argile paint colours selected personally by Deirdre to complement each of the new carpet designs.  Deirdre relishes the opportunity to be on the stand at Maison meet clients and discuss the designs and their inspiration.

Yet again Deirdre has pushed the boundaries of the art of hand knotting to create very distinctive designs using pops of colour (HARLEQUIN), intricate detail (PLUMES/FEATHER BOUND/QUILLS) or colour grading (GOLDEN PHEASANT, EAGLE) from the abstracted (MANDARIN) to the figurative (FLIGHT) creating a new collection that celebrates her instinctive eye for colour and cleverly plays with the shapes and forms of birds and their feathers to create unique designs.

Each design uses varying amounts of silk to mirror the shimmering nature of bird’s plumage and Deirdre’s chosen colour palette is shot with vibrant hues that give the organic forms a 3D quality. 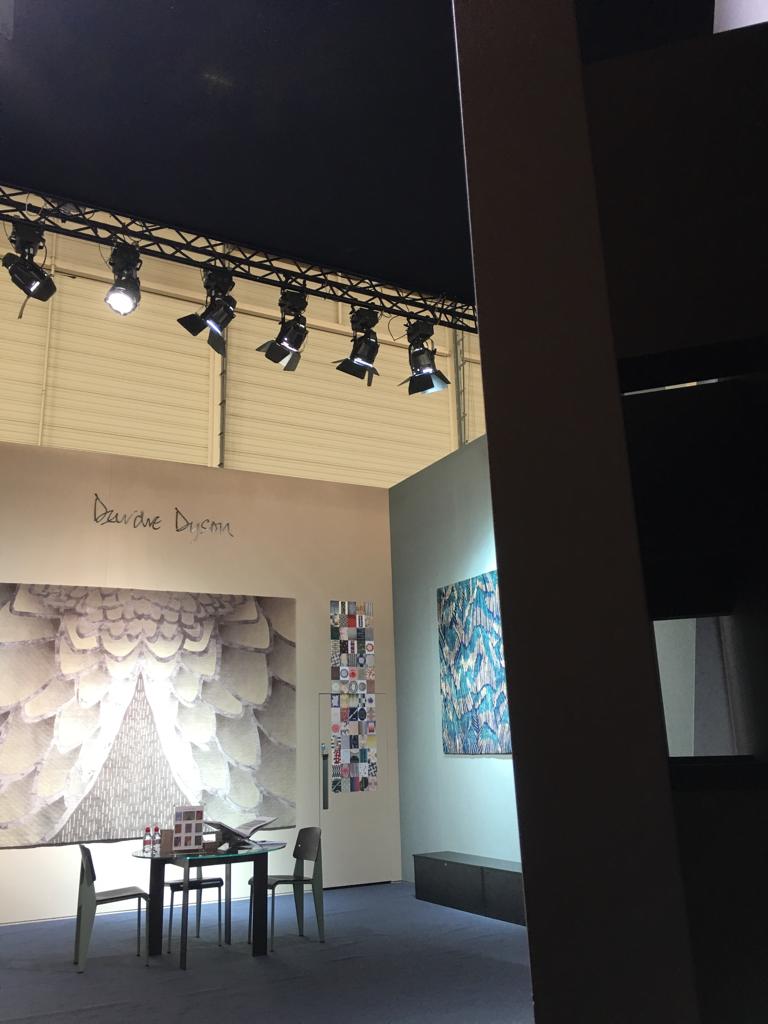 Bordered rugs such as BURLESQUE and FEATHER BOUND are endlessly adaptable – for use under a dining table or bed whereas the bold Studio 54esque GOLDEN PHEASANT makes a statement all of its own as does the elegant scale of the exquisite EAGLE. 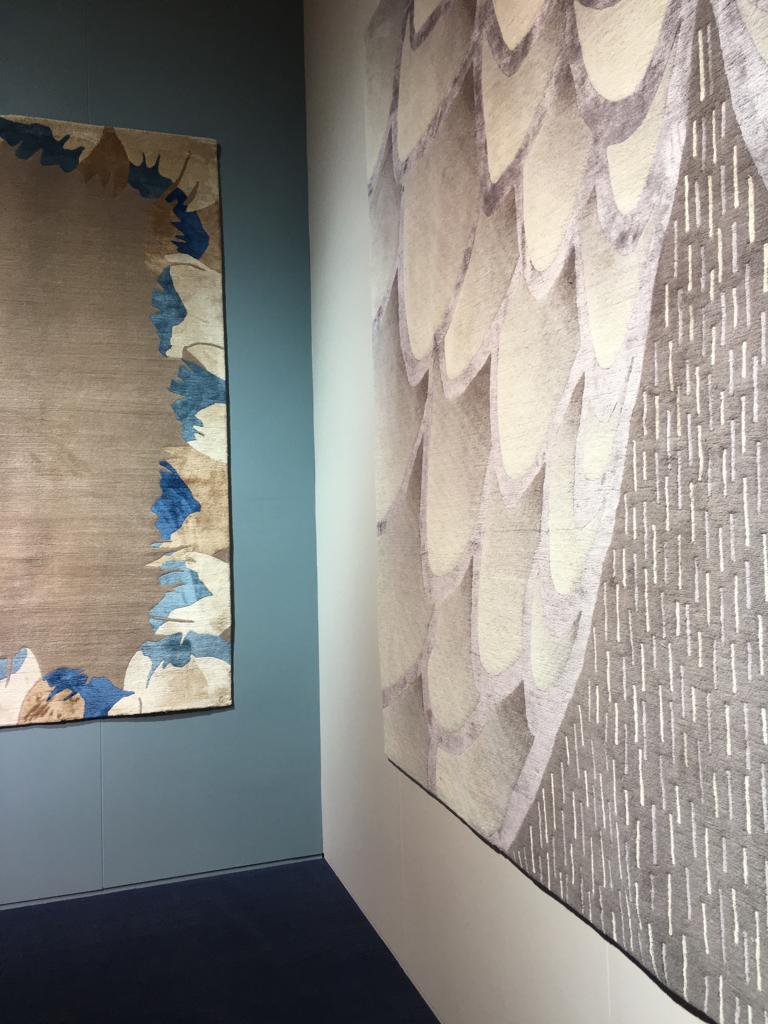 Last year’s HORIZONS Collection played with scale and Deirdre continues this trend with the largest carpet on display, EAGLE mirroring the wing span of its namesake, an impressive 3.4 metres wide.

As with all Deirdre’s designs these sample carpets are just the start, each design can be created in any colourway or size required and most designs can also be gun tufted in 100% wool should the client or space require it. 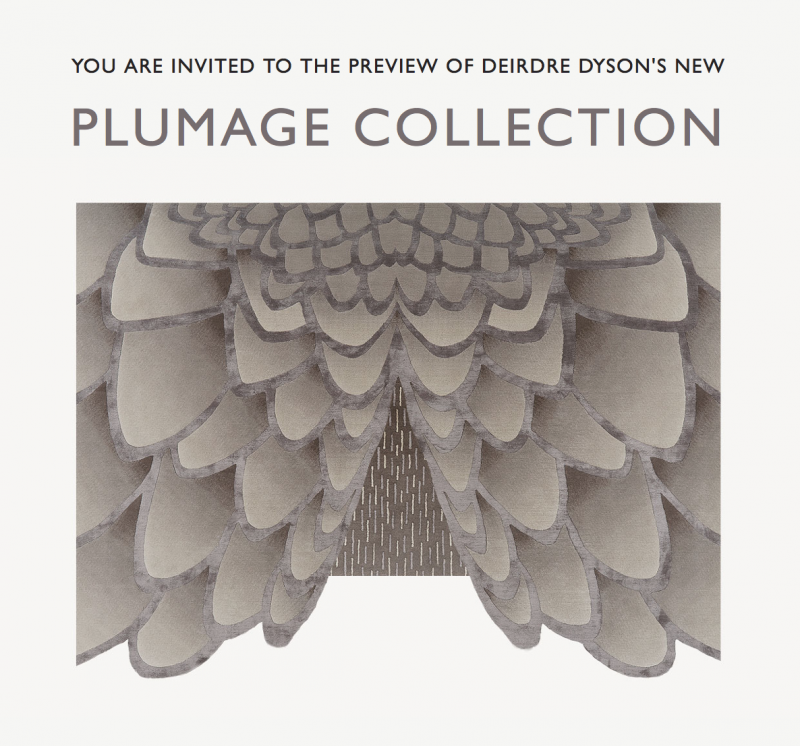 We can’t wait to reveal the new rug designs Deirdre Dyson has created for her 2019 PLUMAGE collection.

EAGLE  (pictured) is an impressive 3.4 metres wide, depicting the magnificent wing span of this majestic bird – the large scale allows Deirdre to include intricate feathery detail and create a spectacular three-dimensional effect through directional colour grading.

Other designs, such as the rich colour palette of GOLDEN PHEASANT, accurately reflects the beautiful tones of this quintessential British bird.

Deirdre’s practice as a fine artist allows her to expertly combine colours to create a beautiful composition that will enhance any surface and interior, as she skillfully captures the shimmer of the natural oils of a feather through the use of gorgeous silk against a luxurious wool background.

“In this collection I have delved deep into the feathers of pheasants and abstracted designs of ducks.  I singled out some feathers and enfolded carpets with others.  Together they make a varied collection of colourful drama and soft luxury.  In creating them, our brilliant craftspeople have succeeded with the most difficult technical challenges I have ever set them.”

Be the first to see the new collection unveiled on 18 January 2019 at the prestigious Maison et Objet interiors exhibition in Paris, in Hall 8 ‘Forever Signature’, stand A32.